When Is a Semicolon Not a Comma?

I learned long ago that somebody who fixes others’ mistakes also makes plenty of mistakes of her own, so I wasn’t the least bit defensive when I heard that a client had a complaint about my work.

I initially felt contrite that I had somehow made a mess of a document and disappointed both the client and Dragonfly. I found a bit of solace in the fact that it was a two-editor job, then realized that even if the other editor was responsible for every misstep, I had missed them when reviewing the final product.

But then I saw the actual complaint: “Please inform the editor that ‘a semicolon is not a comma, the editor changed all the commas to semicolons,’ and the author had to change 43 semicolons back to commas.”

A bit snarky, to be sure, but it was more the topic than the tone that bothered me. Attack me all you want, but I’ll thank you to leave my favorite punctuation mark out of it. Who doesn’t love a good semicolon? It’s powerful enough to make readers tap the brakes between independent clauses and nuanced enough to let them keep rolling along to the related thought that follows. That sweet little workhorse—stronger than a comma, not as fierce as a period—keeps complicated lists organized, holds comma splices at bay, and paves the way for conjunctive adverbs. Not to mention the whole winky face thing.

But if the author was bothered enough to go back through the document and count every single instance where we changed a comma to a semicolon, the least we could do was take a look at the issue. While it would be easy to assure the client that the matter would be looked into and then let it slide, that doesn’t benefit anybody. We owe our clients more than lip service when they have a complaint, and there’s always room for improvement on our end. Plus, it’s a mystery to be solved, and I love a good sleuthing.

Then I dusted off the project’s four documents and, placing my semicolon fangirl status aside, set off to figure out where my fellow editor and I might have lost our way. There were 38 instances in which we changed commas to semicolons (the other five were semicolons in the original documents that we left untouched). In most cases they clarified lists of items with other internal punctuation, making a complex document much easier to read. In one instance they served as the ending punctuation in a bulleted list, per the client’s style guide. In each case, the semicolons had done their job, and the Dragonfly editors had done theirs.

Of course, client complaints don’t always end in such thorough vindication. But no matter what our internal review finds, they deserve our attention, along with a timely, respectful response. In this case, Editorial Manager Magi Walker crafted a snark-free email that explained why we changed what we changed, and why she agreed that our edits were correct. In the end, the client agreed and said the information would be passed along to the author.

We’ll never know whether it was. We can only hope that whoever evaluated the final document is a comma superfan and was able to navigate it without incident. Because a semicolon is most definitely not a comma. 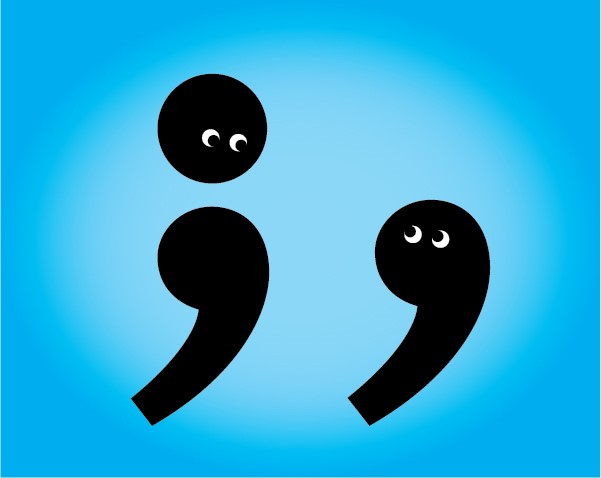