If teenaged Bethany Reiff’s plans had come to fruition, she would be the world’s best forest ranger/novelist, and Dragonfly Editorial would be out one talented writer.

Bethany grew up in northern Illinois — “close enough to the Wisconsin border that I talk funny” — and when it came time to decide what to study in college, she decided to major in forestry and creative writing. She chose the University of Montana in Missoula for its strength in both, but when she got there she found she couldn’t merge her two interests into one degree. Though she was disappointed there was no way to wield a word processor and an ax simultaneously, creative writing won out.

She did, however, have the opportunity to work for the U.S. Forest Service. Fresh out of college, she interned for the Lolo National Forest in Missoula, which promptly loaned her to the agency’s Content Analysis Enterprise Team in Washington state, where she spent the summer analyzing public comment on proposed Forest Service programs and policies. It was there she realized a job in forestry “probably would not have been a good fit.”

From there, she moved to Wisconsin, where her jobs included a stint with the Wisconsin Department of Transportation. “I wrote news releases, I went out and photographed ribbon cuttings and job sites. There was a rock that was named a National Historic Monument, and I got to help organize the events for the …”

Yes, the Van Hise Rock, named for geologist Charles Van Hise, helped inform the study of geology, and was named a National Historic Landmark in 1997 for its efforts. Bethany helped organize the naming ceremony. “This may come as a surprise, but it was not a big affair,” she recalls.

Eventually, she and her husband Aaron, whom she met in college, moved to Dayton. Bethany started freelancing and even tried her hand at teaching. For an admitted introvert, that might not have been the best career move.
“What was I thinking that I could be in front of a class full of eyes staring at me?” she laughs. “Oh my God. I had nightmares for years after that that my students were failing state-mandated testing. And it set my confidence levels and appetite for risk-taking back by a decade.”

A date with Dragonfly destiny

But Dayton is also where Bethany got involved with the local chapter of the International Association of Business Communicators, where she met future employer Samantha Enslen. She started with Dragonfly shortly thereafter. And, though scarred by her stint as a teacher, she realized “that piece of me that likes to share knowledge” could also be fulfilled through writing.

These days, she tackles projects of various sizes for a host of clients.

“I really enjoy writing about scientific breakthroughs and things that are changing people’s lives. Something that I really do enjoy about what we do is, you get to learn so much about so many different things. I think if I had gone into some kind of a science field or a naturalist field, you’re kind of limited to that field, but with what we do, we really do get to learn a lot of stuff about lot of things and share that knowledge with other people.”

Of course, not all assignments are created equal.

There are times when a particularly challenging task lands on her plate. For those occasions, Bethany has a strategic plan of attack. “After I’m done panicking, I try to do as much research online—look at the company that’s doing the request, look at the materials they have on their sites, do Google searches on the topic, look for news stories about the topic. I try to familiarize myself as much as possible before I have to have an interview with the

client.”
After that, she works on drafting intelligent questions, which is where a valuable life lesson sometimes comes into play. “Since working with Dragonfly, I have become very comfortable with saying, ‘Here’s my understanding of what it is that we’re talking about. But I really don’t understand what it is that you do. Please help me,’” she said. “The younger me would have been mortified by that.”

When she’s not wrangling words for Dragonfly, much of Bethany’s time is devoted to wrangling Alex, 6, and Ben, 2. She has found that motherhood has changed many aspects of her life. For one, it means her love for “big people” authors like Barbara Kingsolver, Philip Pullman, and Neal Stephenson has been transferred to an appreciation for authors of children’s books like Richard Scarry, Drew Daywalt, and Jon Klassen, even though “my kids don’t appreciate them as much as my husband and I do.” She knows the day will come, though, when she and her sons can meet in the literary middle. “I’m super excited to start reading Harry Potter and ‘The Hobbit’ with my kids,” she said. “Alex is not ready yet—he told me he thinks they will be too scary for him. In the meantime, I love reading Roald Dahl with him.”

Other interests like traveling and working on the yard are also on the back burner until they can be deemed relaxing pursuits instead of a minefield of logistical challenges and safety hazards. “I like to be outside. I used to like camping. We haven’t done that anytime recently,” she said. “We’ll get there, I know. I keep telling myself we’ll get back into it, it’ll be fine.”

In the meantime, there’s one more passion that feed’s Bethany’s soul: food. “I love, love, love to eat. I love to eat out. I love to eat out at new places. I love to try different cuisines,” she said. “Some people travel and remember the sights that they see; I think about the things that I ate. My husband and I still talk about a place we ate at in Baltimore on our honeymoon 19 years ago.”

It beats foraging in the forest any day.
This post was written by Kathryn Flynn, a Senior Editor at Dragonfly. 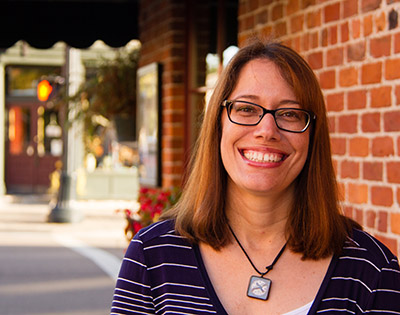