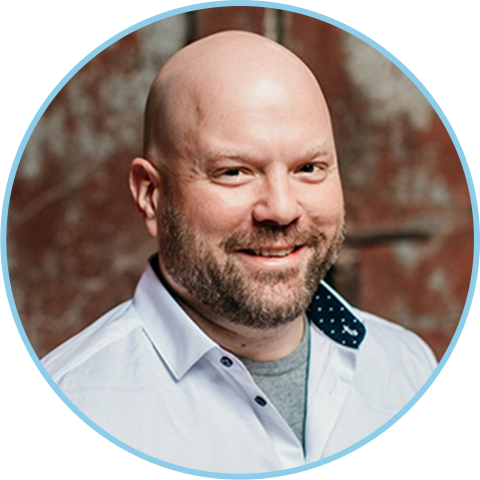 “I love bringing clarity and concision to our clients’ words. That’s what I’m here for, because that’s our job at Dragonfly: to make others look good. I’m so pleased to work with professionals who are dedicated to that spirit of partnership while showing their unique expertise.”

Improv
Exercise
Being a dad

Dave has more than two decades of experience copy editing business collateral, academic writing, proposal content, marketing material, and anything else that’s been put in front of him.

Dave began his copy editing and writing career at Quality Progress, a monthly magazine for quality engineers and inspectors. He was intimidated at first by the subject matter, which he was unfamiliar with, but he soon learned a valuable lesson: Good writing is good writing, regardless of the topic. He collaborated with subject matter experts to craft features and columns on total quality management, lean manufacturing, Six Sigma, and more. From there, Dave switched to the world of advertising, where he wrote copy to sell vacuum cleaners and sausages and spent late nights proofreading product catalogs for all-terrain vehicles and personal watercraft.

In 2009, Dave launched his own freelance editing business so that he could stay home with his five-month-old son. For the next several years, he tested his “Good writing is good writing, regardless of the topic” mantra by editing and proofreading everything under the sun. He’s worked on master’s theses, doctoral dissertations, business proposals, children’s books, cookbooks, suspense novels, and romance novels.

When Dave and Dragonfly found each other in 2017, it was a match made in heaven. He began as a contractor, editing and writing proposal content for several of Dragonfly’s health care and IT clients. Today, as the deputy editorial manager, he works closely with the editorial manager to develop and maintain Dragonfly’s high editing standards. He also edits and proofreads proposal content and other communication for key clients. He’s especially proud of his super-nerd-level love of style guides. Ask him any question about the Associated Press Stylebook or The Chicago Manual of Style and you’ll have a hard time shutting him up.

Alongside his editing career, Dave has worked in improv comedy for 26 years, performing in thousands of shows and teaching classes to young kids, teens, and adults. (In fact, one of his improv students was a writer for Dragonfly, and she brought Dragonfly and Dave together.) He also enjoys playing board games and going on road trips with his lovely wife and two awesome children.

Dave graduated from the University of Wisconsin–Milwaukee with a bachelor’s degree in journalism and mass communication and a minor in English. He’s also an Eagle Scout.