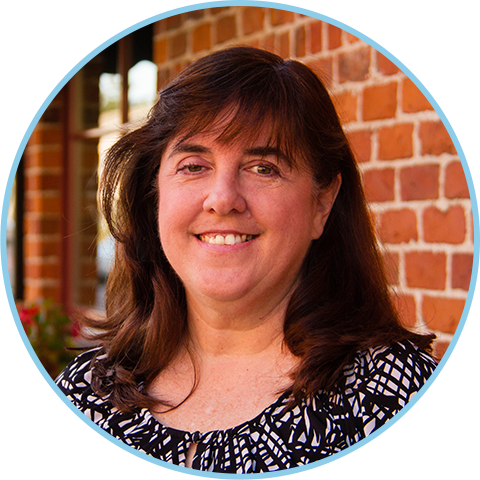 “Because I feel so passionately about the power of words and clear communication, I’m honored that our clients entrust their content to Dragonfly. I also enjoy working with and learning from my fellow editors every day. You will not find a more helpful, diligent, good-natured group of wordsmiths anywhere else.”

Kathryn has edited just about everything in her 35 years in the business (ask her how you X-ray a parakeet!), but she still learns something new every day as a senior editor at Dragonfly Editorial.

Kathryn began her life as a Dragonfly as a contractor in 2014, then joined the staff full time in 2016. Her life as an editor, however, began many years before that.

She learned the basics of editing at Indiana University, where her claim to fame is designing the front page of the Indiana Daily Student the last time the Hoosiers won a national basketball championship (the layout was actually done in a bar several hours before tip-off, but that’s another story). After graduation, she worked in newspapers for more than two decades, starting as a copy editor at The Pocono Record and finishing as an assistant city editor/features editor at The Capital in Annapolis, Maryland. In addition to editing, she also designed feature pages, reviewed theater performances, and wrote a humor column.

After her experience in the newspaper industry, Kathryn worked as a technical editor for a telecommunications company. There, she learned very little about telecommunications but an awful lot about proposals. Not satisfied with limiting her problem-solving to deciphering technical content written by engineers, she also is the proud owner of US Patent 9,267,812, a parking availability option integrated into a navigation app.

These days, as a Dragonfly, she specializes in large projects with teams of editors, but delights in the little jobs as well.

Kathryn is a member of ACES: The Society for Editing and the Association of Proposal Management Professionals. She also edits books for an imprint of W.W. Norton, specializing in cookbooks, travel books, and the occasional bit of historic nonfiction.

Kathryn is happiest when spending time with family (she has a daughter, a son-in-law, and a granddogger), reading a book on the beach, or taking in a local trivia night, where her strengths lie in music, sports, and talking her team out of the correct answer.