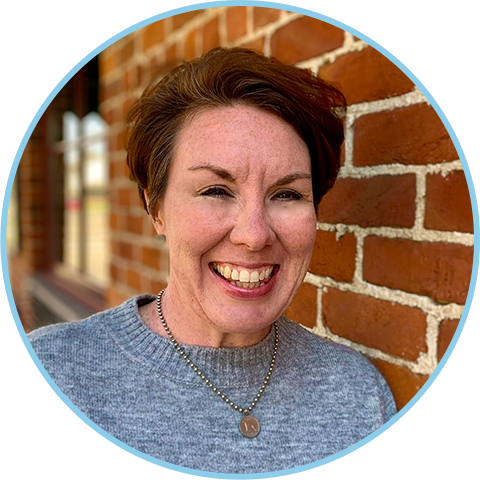 “I am grateful I get to work for a company that shares my personal values. Integrity, collaboration, and helpfulness are embedded in everything we do at Dragonfly, and it shows in both the Dragonfly culture and the gratitude we receive from our clients.”

Andi has years of widely varied experiences organizing large- and small-scale events, wrangling people, and coordinating nonprofits, all of which have led to her role as the operations coordinator at Dragonfly Editorial.

Andi graduated from the University of Cincinnati with a degree in English literature and quickly went to work as an education assistant and then manager for the Victoria Theatre Association in Dayton, Ohio. Within those roles, she scheduled productions, organized field trips, and wrote study guides for children of all ages attending theater performances. She realized then that she loved diversity in her daily tasks and in the people she encountered.

Her love of the arts then took Andi on a different path. For over 20 seasons, Andi has been a backstage dresser for professional Broadway tours, operas, ice shows, concerts, and everything in between. For the past six years, she has honed her scheduling, organizing, and negotiating skills as the business agent for the local wardrobe union under the International Alliance of Theatrical Stage Employees, Moving Picture Technicians, Artists and Allied Crafts of the United States, Its Territories and Canada. She has worked in every venue in the Dayton metropolitan area and has met (and dressed) some unforgettable and fascinating people!

While working within the world of theater, Andi has also worked, volunteered, and served as a board member for various nonprofits and companies. She has organized events, written grants, handled social media, and conquered whatever was thrown in her direction.

Andi joined Dragonfly in early 2020 and is still trying her hand at new things and loving it. Just as she does in theater, she organizes the behind-the-scenes world of Dragonfly Editorial. By being service minded and managing the back end of Dragonfly, she hopes that she is helping everyone else do their jobs with more ease.

When not working, Andi spends time with her fabulous husband and three almost-grown children or volunteers in the community with her friends. She loves her dogs, Bingley and Willoughby; music; all things British; baking; traveling; and working on her family’s historic home.