It might have taken Dragonfly President Samantha Enslen a bit of time to find editing, but it was worth the wait. As a girl growing up just outside of Dayton, Ohio, Samantha had none of the doctor/firefighter/princess/veterinarian aspirations of her peers. Things weren’t much clearer when she headed off to The College of Wooster in northern Ohio, where she graduated with degrees in English and women’s studies but with no solid plan for what to do with them. It would be a bit longer before she had an answer.

Having followed a boyfriend to Washington, D.C., Samantha was contentedly working at the Jolt N’ Bolt, an Adams Morgan coffee shop. One of her regular customers owned a small publishing house, which piqued her interest, and whether he was dazzled by the resume she slipped him or just felt sorry for her, he gave her an internship in the company’s mail room.

The work of shipping out customer orders eventually grew wearisome, though. “There was one day I thought, I can’t do this anymore, but I was basically too chicken to call them and say I wasn’t going in, so I just went in anyway,” she recalled. As fate would have it, that day another employee asked if she’d like to proofread the holiday catalog. Though she suspected it was a pity assignment, she settled in with the proofs, pored over the Chicago Manual of Style, and turned in the work.

The next day — yet another day she found herself lacking the courage to quit — the woman who had given her the catalog assignment immediately approached her. “She walked straight up to me and said, ‘You need to be an editor.’ And so from that moment I thought, ‘OK, great. Now I know what I’m supposed to be.’”

Next up: how to become an editor. She took in-depth classes on proofreading, editing, and technical writing, and found them to be a good fit. “I felt like editing somebody else’s work and being able to see the underlying intent, the underlying fabric, and help them bring out what they’re trying to say—I find that very easy, very natural, very enjoyable,” she said. Editing also fed her inner word nerd. “It’s very satisfying to look things up, to find answers. There are gray areas in editing and grammar, but you usually can find the answer. Editing is really just like a game. The actual practice of copyediting itself is a seek and find for mistakes, errors, typos. Really, that’s all it is.”

With some solid skills in hand, Samantha signed on with temporary agencies that supplied writers, editors, designers, and the like to companies in need of creative talent. “It’s like people do now with Dragonfly. I would take their editorial test. If I passed their test, I’d get on their roster and they would start assigning me projects,” she explained.

In those pre-internet days, most of her work was done on site. One fateful assignment sent her to Computer Sciences Corporation, better known as CSC. She started working there regularly—CSC liked her flexibility and willingness to work odd shifts or extra days. (Or, as Samantha put it, “I was single and, well, I’ve never had a social life, so I was happy to work whenever they needed me.”) After about a year of temping for CSC, she was offered a full-time position there as an editor. She accepted and stayed for another seven years, eventually becoming the manager of their editorial function.

However, by this time she had a husband and two children along for the ride. “In retrospect, it was the most foolish and ludicrous thing you could imagine. I convinced my husband to move back to Ohio with me with the lure that he could stop working and take care of our kids full time,” she laughed. “So, yeah, I’ll move our family back to Ohio, he’s not gonna work, and I’ll support us all doing freelance editing. But I was so motivated. I had decided at a certain point I wanted to be back home, near my parents. That was all that was important, so I was going to make it happen.”

It wasn’t just a return home, though. It was a return to the type of work she liked best. “I did the corporate thing, I was a manager in a giant corporation, and that was fun. Now, I thought, let’s go back to freelance editing, because that’s what I like,” she said. “I can just sit quietly in my office and do that. I honestly never had any intention of anything other than that.”

The projects got bigger

But the work kept coming, and the projects got bigger. Samantha was able to draw on quality freelance editors and writers she had worked with at CSC to get the jobs done. In 2005, Dragonfly Editorial was born. And though her plans were modest at first, she definitely had her sights set on one very big client: consulting firm Booz Allen Hamilton.“I had been placed there through an agency when I still lived in D.C., and I decided I would write an article for Copyediting newsletter and I would ask the people at Booz Allen if I could interview them on their best practices for writing proposals,” she said. Whether it was a case of flattery-will-get-you-everywhere or just a fortunate turn of events, “They eventually asked me if I could start doing editing for them. The tremendous amount of work we got from them over a few critical years, say between 2008 and 2012, is really what led us to build up that big pool of editors that we use regularly and to hire our first editorial manager.”

Dragonfly’s repertoire also expanded with the addition of a medical journal, European Urology, to its client list. “To this day I don’t know how they found us,” Samantha said. “I literally got a phone call from somebody in Italy saying, ‘Hi. Do you guys do medical editing?’ That contract allowed us to start building out the medical editing side of the business. And again, it’s just grown from there.”

It’s who you know

Samantha also spread the word about Dragonfly by joining professional organizations. Several years ago, after giving a presentation on proposal editing as part of a boot camp in D.C., a board member of The Society for Editing (formerly the American Copy Editors Society)  suggested she consider running for the board. She did and soon after took over the ACES newsletter, Tracking Changes. She currently serves as ACES vice president.

“I started that newsletter because they had a newsletter that was just news about the association, but I wanted to do something that was more about how to be an editor. So the focus of it became more about tips, tricks, and tools for editing.”

“I talk a lot about plain language and readability and how to create writing that is clear, easy to understand, easy to read,” she said. “I talk about general best practices in editing and different methods that I have used to make writing less painful for me, which has been a 15-odd-year professional struggle.”

When not presidenting Dragonfly or vice presidenting ACES, Samantha can usually be found at the Tipp City, Ohio, home she shares with her husband, Greg Enslen, an author. They have three children: Alexander, 16, a junior in high school; Annabelle, 14, a freshman; and Catherine, 9, a third-grader. In keeping with the three theme, the family also has three dogs and three cats, plus one long-term dog-sitting assignment. At one point, their menagerie also included two rats, but that didn’t end well. “They were very nice, except one died and then the other one ate it.” Though she admits that setup may be practical in the wild, in suburban Dayton, “It kind of soured me on rats forever.”

She reads a lot: 60 to 75 books a year, by her estimate. But don’t look for the latest bestseller on her nightstand. “I tend to prefer things that were written mostly before 1980,” she explained. “And I swear I’m not saying this because I’m an editor, but hardly any modern fiction is edited right, and it’s just really frustrating to read. It’s either wordy or clunky or the sentences are off, so I just read from the age of traditional publishing.” Her favorites are Golden Age mysteries, with Agatha Christie’s work coming in at the top of the list.

Samantha is also a prolific tennis player. She learned to play as a child during the sport’s heyday in the 1970s. She played a little bit in college, lost interest, then picked it up again after moving back to Ohio. She currently plays two or three times a week, including team competitions against other area clubs. If asked, she will humbly explain that, in the world of tennis, a teaching pro ranks 5 on a scale of 7, with 7 being the Serena Williams of the world. Samantha is a 4.5.

Fortunately, Samantha has no intention of ditching the editing world to become a tennis pro. She plans to continue guiding Dragonfly and maintaining its focus on IT and proposal work, social sciences, healthcare, architecture, engineering, and construction. She’s open to any other opportunities that arise, too. “Our journey really has been one of exploration and discovery rather than setting a specific goal and trying to do just that,” she said. “It’s really been about doing good work and trying different things, and somehow that seems to attract other good things to you and to the business.”

Naming a business is like naming a child. Both are exercises in branding with the goal of being memorable but not weird, meaningful but not inexplicable, cool but not too trendy. It’s not a

decision to be made lightly, and it requires thought, discussion, and time.

When it came time to name her new business, Samantha Enslen used the same tactic she and her husband, Greg, used to name their children. “We just stuck a piece of paper on the fridge and wrote down different ideas, and eventually one of them rose to the top,” she said.

Before deciding on Dragonfly, a tribute to a favorite necklace Greg bought for her at a Renaissance festival, Samantha strongly considered the name Editorial Avengers for her business. And though we all know editors are superheroes, her sister, Dragonfly Design Manager Lexy Nesbitt, recommended against it. “She told me that that would be too niche and too restricting,” Samantha said. “It was fine to be kind of cutesy, but not cutesy with your entire brand. In retrospect, I’m really glad I didn’t do that.”

As for the children, the paper-on-fridge method yielded a different theme altogether. Each is named for a character from Buffy the Vampire Slayer: Xander, Annabelle Willow, and Catherine Cordelia. Catherine’s first name also pays homage to Kathryn Janeway, captain of the Starship Enterprise on the Voyager series, and Samantha’s inability to handle two names beginning with a hard C sound but spelled with two different letters. Apparently, we all have our kryptonite.
This post was written by Kathryn Flynn, an editor at Dragonfly. 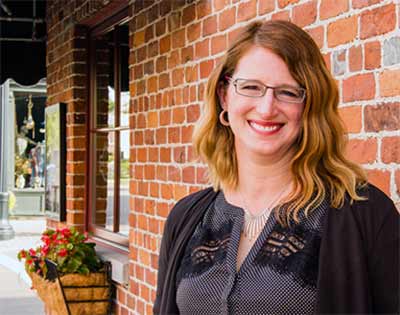