Cynthia Smith has yet to meet a keyboard she can’t master. Though her initial plan was to become a concert pianist, these days she’s a writer, creating compositions on an entirely different kind of keyboard for Dragonfly and her own freelance clients.

The Cincinnati-based wordsmith started with Dragonfly two years ago after an acquaintance introduced her to President Samantha Enslen at an International Association of Business Communicators conference.

She loves the flexible schedule and variety of work she’s tasked with, and she’s particularly fond of her co-workers, who share her affinity for words and clear communication. “I think words are fascinating and have so much power. And people pretend like words don’t matter, but they matter enormously,” she said. “I’m really kind of passionate about communicating in a clear way because I think a lot of people don’t.”

Though she worked as an advertising copywriter for several years, Cynthia prefers assignments with a bit more substance. “I’ve always been more of a kind of person who writes informative and educational and inspiring things versus what you immediately think of when you think of advertising,” she said. “I’m more of a long-form writer, and Dragonfly was just a perfect fit. I’m writing social media to drive people to white papers about industry trends, so it’s a more informative type of writing, and I’m writing little profiles about people, which is more like feature writing than advertising.”

Cynthia, a native of Indianapolis, majored in music at Indiana University. “I imagined I would become a grand concert pianist on the stage of Carnegie Hall,” she recalled. “But it was a pretty short time before I realized that wasn’t going to happen and I should think of another direction.” Fortunately, music majors at Indiana could have an outside field of concentration, so Cynthia added journalism, marketing, and speech classes to her course load and shifted her focus to arts administration.

After graduation, she took a job as group sales manager for the Cincinnati Playhouse. From there, she took on copywriter at two different agencies. Then, in 1989, after a magical seven-month trip around the world with her husband, she decided to start her own company, Smith Communications.

Being her own boss and working for Dragonfly both provide the variety she craves. “I’ve done a lot of healthcare writing, business to business. It’s really been all over the map,” she said.

Such a diverse clientele often requires a versatile skill set. Cynthia said her approach to writing assignments depends on the size of the task at hand. “I just try to dive into it and learn as much as I can as quickly as I can.

Sometimes I outline if it’s something big, but usually if it’s a profile or advertorial, I can just read it over, pull out what I want to start with, and then I can just sort of magically find transitions into the next part,” she explained. “I feel that’s a strong suit, being able to make things flow in a way that makes sense.”

Cynthia has been married for 35 years to her husband Denny, whom she met after moving to Cincinnati for her first job. They settled in to their new life together, but when they tried to start a family, they had a tough time getting pregnant. After eight years of infertility treatment, the couple adopted infant son Jason, now 21. Eighteen months later, sister Jasmine, now 19, joined the fold. Though some may consider the family unconventional — both parents are white and both children are African American — to the Smiths it couldn’t be more natural.

“The amazing thing I always tell people is bonding with a child has nothing to do with being pregnant. It’s having responsibility for that child,” she said. “We were at Jason’s birth, and the instant he was born I would have died for him. I’m sure being pregnant makes you feel close to the child, but it can happen other ways, and that bond was instant.”

With both children now in college, Cynthia has a bit more time for two passions: a good bike ride and a good book. Make that many bike rides and many books.

A lifelong cyclist, she took it up a notch when she joined an all-women’s cycling group, Bad Ass Bicyclists with Estrogen (BABES) about a decade ago. Now a board member of the Cincinnati Cycle Club, Cynthia leads about 70 group rides a year. “I kind of found a niche being the casual leader, so I nurture people who are starting out.”

Her husband cycles as well, though they rarely bike together these days. “We kind of have a different perspective,” Cynthia explained. “He enjoys a solitary ride. He gets up every Saturday and Sunday morning and does a similar route. I like the group, I like the socializing. I like being the leader because I can control where we’re going and how fast we’re going to go.”

When the day’s ride is done, Cynthia likes to curl up with a good book. “I like a variety. I like fiction for sure. I do read some chick lit, I’ll admit, but I like stories that have a little more meat to ’em,” she said. Her favorite authors range from Barbara Kingsolver to John Irving, with the occasional Maeve Binchy (that would be the chick lit) thrown in for good measure.

She also likes to keep track of what she reads. “I write down every book that I read in a notebook. And then sometimes I’ll do little miniature reviews of maybe my 10 best of the year. I read about 50 books a year, and so I’ll do these little mini reviews for friends who like to read.”

And though she loves to read books, she doesn’t see herself writing one. “People always say, ‘Why don’t you write a book?’” she laughs. “I tell them I don’t think that’s for me, but I really do get into every topic I’m writing about. I think there’s this innate curiosity in me—or maybe it’s curiosity plus ADHD—that makes this perfect. In one day I’m writing about trenchless pipe repair and then I’m writing about the newest trends in robotics, and it’s all in the same day. And that’s perfect for me.” 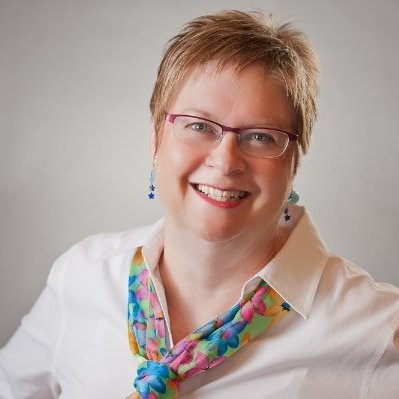