James Fraleigh is a copyeditor’s copyeditor. After a day of working on documents as a contractor, he’s happy to spend time reading books about editing, talking to other editors about the nuances and best practices of the job, and actively participating in online and real-world editorial meet-ups. And you thought you were dedicated to your career.
The owner of a 10-year-old copyediting and proofreading practice, the Westwood, New Jersey, resident first met Dragonfly founder Samantha Enslen in 2014 at an American Copy Editors Society (ACES) conference. Samantha asked him to join up two years later. “I was thrilled to have been asked and very happy to dive into a project that seemed like a really great match for my skills.”
That first Dragonfly assignment was a big one. “I collaborated with the mighty Laura Poole [then co-owner of Copyediting.com] on a gigantic occupational therapy book. We had to break out our American Psychological Association style manuals, and we spent all of the summer and much of an autumn tag-teaming on this truly immense book. It was a great trial by fire in terms of working with Dragonfly; working with a huge, multipart project; and working with someone like Laura Poole.”
Since then, James has worked mostly on medical copy and governmental policy documents for Dragonfly, which sometimes touch on health or pharmaceutical topics. “The broad range of topics within the medical space keeps things very fresh,” he said, and that diversity is one of the things he likes best about Dragonfly.
“I appreciate the variety, both in project duration and subject matter,” he said. “Plus it’s great to know that Sam is out there looking for new clients who are a great fit not only for the way the business is developing but also for the editors, writers, and artists that she’s recruited. It’s been a real privilege to become a regular editor for some of our clients.”

James’ path to editing began with a bachelor’s in English from Boston College. “It certainly taught me about deadlines. It gave me that wide-ranging source of liberal arts information, and the constant writing and research taught me to look things up and check sources while working,” he said. “It also improved my own writing because I did a lot of it, and it improved my ability to read, especially in voluminous bulk.”
After graduation, he first worked as a production editor on psychology and social science journals at Lawrence Erlbaum, which was itself a learning experience. “It exposed me to a huge number of different job functions,” James said. “We took them from manuscript to printer. There was a lot of editor and author contact, and I learned proofreading and copyediting for the first time.” He also mastered desktop publishing, as the company had recently begun typesetting its own material. Most important, the position gave him his first taste of freelancing when he joined the department’s copyeditor pool.
He spent seven years at Erlbaum, but managing a work group pulled him away from the production tasks he loved. So he left for Aspen Publishers, the legal, tax, and accounting branch of Wolters Kluwer in New York. “I was initially an editor, but the production department made me an offer, so I switched and began laying out their newsletters and journals,” he said. The tradeoff for this move away from editorial work was the chance to experience lively Midtown and Chelsea—and to catch up on reading during his commute.
In 2007, James’ job was moved overseas, so he returned to New Jersey as the managing editor of a nursing magazine. But it was short lived. “This was heading into the Great Recession, and there had been successive rounds of layoffs,” he said. “You kind of wonder who’s going to be next, and that question was answered on December 18, 2008, when I was let go.”
It turned out to be a fortuitous turning point. As he reasoned at the time, “New York City publishing houses were going to keep shedding jobs. They weren’t going to expand their in-house staff, but they might need people to do freelance work that they had previously done in-house.” His hunch was right: A week later, his former boss asked him to resume maintaining the magazine’s website. “So my former employer became my first freelance client, and it started growing from there.”

an early lifeline: Their members-only job list helped him pick up an anchor client that provided years of work.“That lasted long enough for me to begin contacting academic publishers to do the sort of work that drew on the style guide knowledge and experience with academic writing that I had built up at my first full-time job,” he said.
James joined ACES a short time later, becoming a frequent participant in both EFA’s and ACES’ regular Twitter chats while expanding his network of fellow editors. He described his first ACES conference, in Las Vegas in 2014, as career altering: “There is absolutely nothing like interacting with scores of passionate, engaged copyeditors who are right there, in a concentrated learning environment where everyone gets the chance to be a little bit more than just their Twitter description or an avatar,” he said. “I knew before I got on the plane that I would attend the next one.”
Following the 2017 ACES conference, James joined his first Mastermind group. “Some of my fellow copyeditors started thinking about forming a little group, and I was honored to be asked to join,” he explained. “We have a webinar with a theme every month, and in between we keep in touch via Slack, exchanging business ideas, discussing clients, and referring projects.” In September 2018, they held their first retreat in Margate City, New Jersey. “We rented a house on Airbnb and gave presentations. One of our number even made a board game! The cards we drew had questions about editing, business, and our practices that sparked conversation and exchange of ideas. It was glorious!”
James notes that smaller, local EFA and ACES gatherings also can be beneficial. The important thing is to make a connection with colleagues who can provide wisdom, reassurance, and reality checks. “This can be a fairly isolating way of working, even if you have a congenial group like multiple Dragonfly editors to work with or excellent staffers who are ready to swoop in and say, ‘Hey, you need something to work on?’” James said. But these peer connections and trade groups have been vital for staying busy. “I tell folks who are full time to join an association in their field because it’s the fastest way you’re going to get rehired if you get laid off. And if such an association doesn’t exist, start one.”

James is also living proof that the mile-wide/inch-deep, don’t-judge-me-by-my-search-history brain of a copyeditor is good for more than just crosswords and bar trivia: He is a winning Jeopardy! contestant. In 1997, he passed an online test, then was invited to take a longer test in person with dozens of other registrants—and suddenly found himself in a live rehearsal. “They wanted people who could keep the game going, who weren’t going to freeze up,” James said of the audition. “I don’t know how I slid by that because by that point, I was a little bit stressed. They just needed to see whether or not you were going to stress puke on camera.”
Thanks to a strong constitution and a lucky streak of easy topics like “Women in Science Fiction” (Note: Your definition of “easy” may vary), an invitation to fly out to L.A. soon arrived. “I have taken no SAT or gone on any job interview that inspired the raw, naked terror of having to be coherent while buzzing in and answering questions for a studio audience,” he said. But he won the first day, and even managed to entertain host Alex Trebek with a spot-on Homer Simpson impersonation.
James had the lead again the second day heading into Final Jeopardy. The category was “The Bible.” The product of a Catholic high school and a Jesuit university thought he might have a decent chance and bet it all. The question, which none of the contestants answered correctly, was, “The name of this two-part book of the Old Testament means ‘story of the days’ in Greek.” The answer—which James described as one of those books they always just skipped over in school—was 1 and 2 Chronicles.
Despite that loss, he left with his first-day winnings of $12,300 and a consolation gas grill. But he also went home with an appreciation for the knowledge that editing could provide. He credits the eclectic reading inherent in copyediting and proofreading for “building the perfect amount of brain lint” to pull random facts from when facing down Trebek.

Read all about it

In his spare time, James likes to crack open a good book, but even then he usually chooses titles that will improve his editing. “There’s a to-be-read pile that glares at me sullenly when I pass by,” he laughed. “It’s mostly nonfiction because that’s what I edit. Picking up a variety of different styles and subjects helps me recognize the way the language continues to evolve, and it helps me understand the work of both the developmental editors and copyeditors in making this book coherent and engaging.” Good editors and good writers are good readers, he maintains, comparing his leisure reading to fertilizing soil: “You’re tilling in new mulch and creating more fertile soil in which you can germinate your own projects.”
Regardless of the project size or subject, editing continues to bring James great satisfaction. “It’s a pleasure to help authors communicate more clearly with their audience. And when you get to the point where you begin to read the author’s mind, and you can suggest an edit based on that, that’s even more satisfying,” he said. “If you approach editing in a spirit of improving the dialogue between writers and readers, it can help you sound less like a scold and more like a partner.”

This post was written by Kathryn Flynn, a senior editor at Dragonfly. 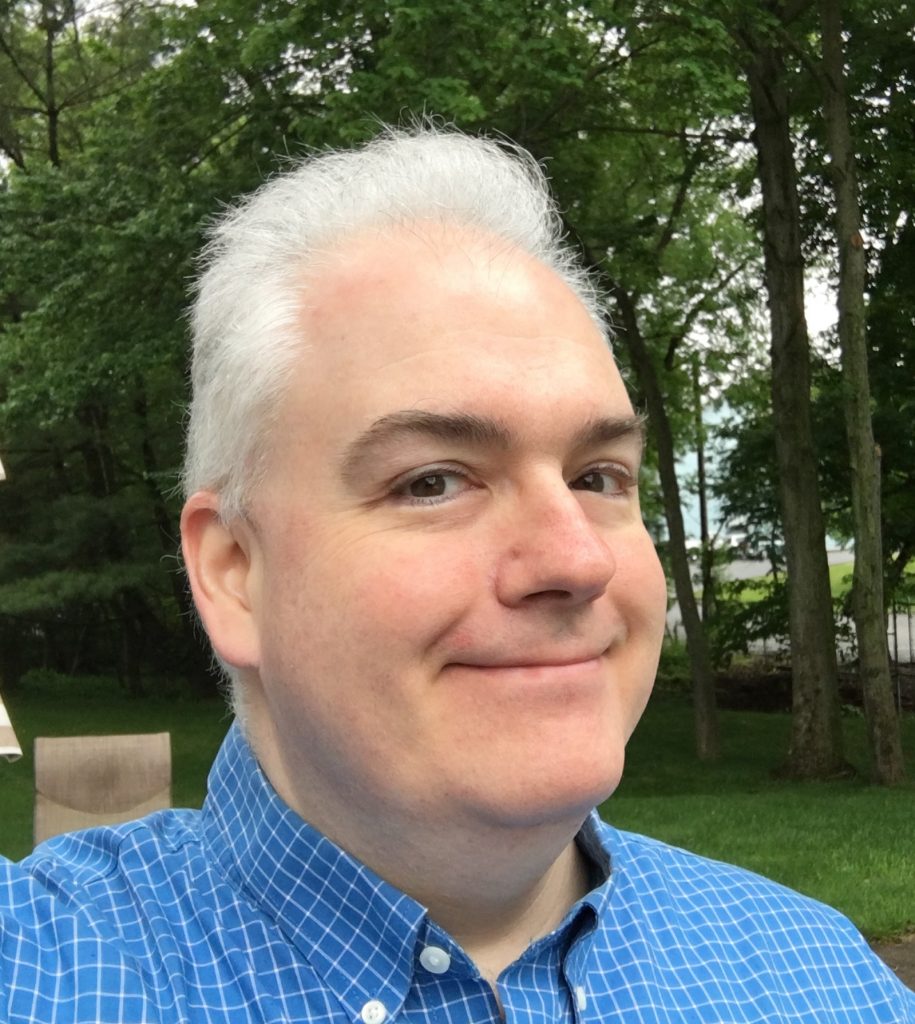