Dragonfly’s Kim Yowler Is a Technical Writer With Class

Kim Yowler is fearless when it comes to writing assignments. Where most would find the exacting requirements of a government proposal overwhelming, she’s the queen of compliance. And while the thought of a classroom full of new writers would send many running for the hills, she’s the superintendent of skill-building.
The south central Ohio native began her career with a bachelor’s degree in English education from Wright State University. She taught 12th-grade literature for seven years, then took a couple years off to stay at home with her children before going to grad school. After earning a master’s in English from Miami University in Oxford, Ohio, she began teaching there, a job she still enjoys. This semester, she’s teaching two sections of technical writing and one section of composition and rhetoric, a classroom filled with new writers who sometimes don’t know a motif from a metaphor.
“I actually really love new writers. They’re just so wide-eyed and scared to death. They’re not jaded and all that,” Kim said. “And sometimes you get returning students that have a whole lifetime of experience compared to everyone else, and they’re even more scared for some reason. I like the new writers. I think they’re kind of fun to work with.”

For the technical writing class, Kim draws on nearly a decade of experience in the field, which began when she was an exhausted mom with two young children and a freshly minted graduate degree. “I had a friend who worked at a research company, and she said, ‘Hey, we need someone to come and do some writing for us and just some editing. Can you edit all this boilerplate, can you clean all this library up for us?’ And I said, ‘No. That sounds terrible,’” Kim recalls.
But her friend convinced her the job’s flexibility and pay would be ideal. So she took the position and spent the next nine years working in research and development, creating materials, and writing proposals, marketing material, and websites. “You wear a lot of hats in a small company, and I just got immersed in all things kind of high tech, everything from systems engineering to molecular development,” she said. “I ended up speaking the language of engineers, so it kind of made sense to me.”
She’s happy to pass along lessons learned to her current students. No matter what she’s teaching, Kim encourages them to, above all, know their audience. “Who are you writing to?” she asks them. “That’s advice I’ve gotten many times, and it’s advice I give to my students. You need to be on voice. Commercial has a different voice than government. Medical has a different voice than industries of different sorts. So figure out their voice and make sure you write to your audience.”
That’s sometime easier said than done, though. “It’s really hard to get 30 people to follow directions,” she said. “But that’s part of compliance, to follow the directions. This isn’t creative writing. This is a document to the Army. I tell them, ‘Don’t try to sound smarter. Just be clear.’”

Kim began contracting with Dragonfly about four years ago, shortly after she started her own business, BlackEye Writing. “I’m not a great networker, but when I was kind of starting to go out on my own, a friend of mine who is more of a commercial writer said, ‘I know somebody who might be a good match for you. They work in some more technical fields.’” So Kim met with Dragonfly owner Samantha Enslen, and the two agreed it was a good fit.
“I started off editing because that seemed like what Dragonfly did more of,” Kim recalls. “But as Dragonfly was growing I was taking on more government-related proposals.” She knows proposals aren’t everyone’s cup of tea, but she enjoys the challenge. “I think it’s the idea of compliance and being able to translate from engineer-speak into what the customer wants, something that’s both compliant and kind of cool.”
She said one of her favorite Dragonfly assignments was a technical manual that required her to work with a graphic designer. “When it was finished, it was really useful and nice looking,” she said. “I like being part of something that’s bigger than what I am. I know my limitations, so I love it when people with great skills support me and make my writing look really awesome.”

How ya gonna keep ‘em down on the farm?

Kim’s current life as a suburban mom, technical writer, and college instructor is a far cry from her childhood in south central Ohio. “I grew up in a farmhouse that was on land that was given to my family for fighting in the War of 1812,” she explained. “This 150 acres of land was a grant to my family for being soldiers. So they took their 11 children or whatever and farmed this land that was supposedly out West because that’s what Ohio was in 1812.” Kim lived there until she went to college and has been based in the Dayton area ever since.
She now lives in Beavercreek with her husband, Kevin, who designs fireplaces. Between them, they have five children. “He has three and I have two, and they’re all from ages 21 to 17,” she said. “At one point we had five teenagers all in a house together, blending a family. But we survived it.” They also have year-old Australian shepherd named Annie, whom Kim described as both “exuberant” and “a complete idiot.”
When not herding teenagers or trying to get Annie to calm down, Kim and her husband like to garden and just enjoy the outdoors. They recently bought a cabin on a secluded lake in southern Ohio between Rocky Fork Lake and Paint Creek. Don’t think for a second that “cabin” equates to roughing it, though. “It’s actually very, very nice,” she said. “So I take my computer and I work there. And we go hiking, and we go kayaking a lot.”
Kim says she enjoys reading and spending time in the kitchen, though her husband is the better cook. “I can do a pretty good stir-fry,” she said. “I can get pretty creative. And I’m trying to just eat better, like more vegetables and stuff, so I can sneak more vegetables into myself by hiding it in stir-fry.”
One place you won’t find her, though, is on social media.
“I have LinkedIn for my business, for writing, but I don’t do any social media. I’m very private with information. I used to do that stuff, and then I thought, ‘I don’t really feel like this is benefiting me,’” she said. “I don’t judge anyone else; it’s just my personal preference. … You don’t need to see my spaghetti. But my stir-fry, maybe that’s a game changer.”

This post was written by Kathryn Flynn, a Senior Editor at Dragonfly. 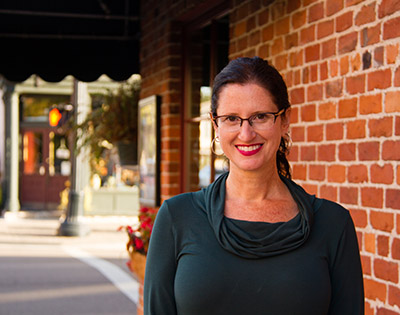